Day 2: The Hike up to Gunung Stong 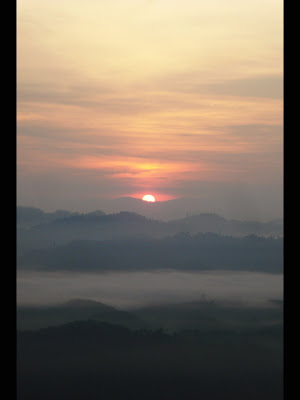 9:30am, February 27th, 2010, Baha Camp, Jelawang: After watching the magnificent sunrise from the top of Jelawang waterfall (well, admittedly everyone EXCEPT ME. I was still in dreamland at that time) and having breakfast consisting of a combination of Maggee mee, Cream of Mushroom soup and some black bean fish in a can, we set our sights for the summit of Gunung Stong. We had loaded our bags with drinking water, two loaves of bread and cans of sardines, tuna and baked beans for the anticipated 4 hour hike to the peak, 1390m above sea level. Realizing the extent of my stamina this time around, I had shed most of the back breaking weight I brought along with me to Baha Camp. I was also secretly appreciative that a vote to stay another night at Jelawang instead of shifting camp to Gua Bogor as per original plan was passed by the majority of our participants. This was mainly due to the fact that we were informed by the guide that there was no water there, which in hindsight was not very accurate information. Retracing our way out from the camp via its sole entrance, we arrived at the fork in the road we encountered yesterday that led uphill. Any illusions that the hike up is going to be an easy one was quickly dispelled 5 minutes on the trail. Like the way up to base camp, it was virtually uphill ALL the way, the incline getting steeper and steeper as we approached the top. 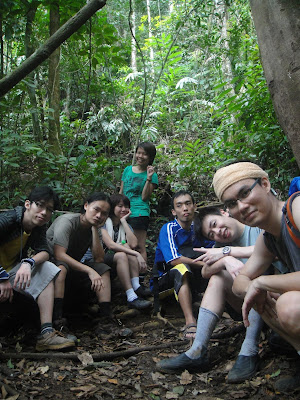 Resting by the wayside on the way up to Stong
The first 30 minutes of the trail resembled the track from Kem Pacat to Puncak Pengasih in Nuang, as we waded over a literal trench, carved out in the middle of the laterite slope by down flowing rain water. 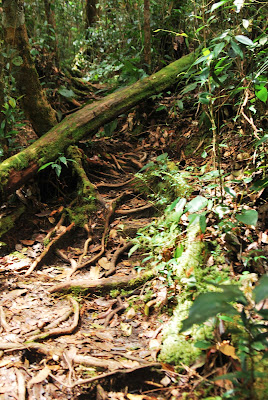 Jungle trail... can you see it? ;)
These upward sloping tracks were punctuated by brief patches of flat ground overgrown with ‘paku-pakis’ that probed into the track, it’s groping vines, leaves and stems threatening to entangle and virtually strangle anyone moving through it like something out of a B-grade horror movie. 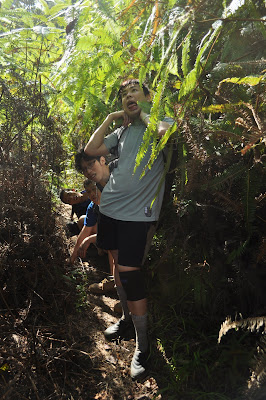 We passed through two streams of cold mountain water before reaching the mid way point represented by Gua Bogor. 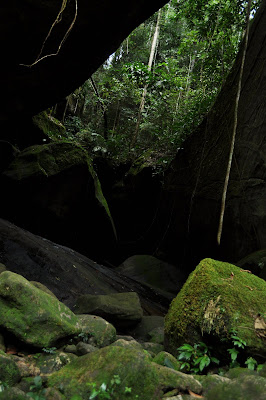 Gua Bogor
Not really a cave in the general sense, it is more of an enclosed area formed by a pile of giant boulders in the jungle. A stream runs right next to the ‘cave’ offering a source of water for cooking and bathing, which was actually contrary to what our guide had told us back at the camp. If we had been told that there was water conveniently available here, it would just have been ok to bring up our sleeping bags and a night’s worth of food, leave it here and continue up the mountain before returning to spend the night. We didn’t tarry long at Gua Bogor though as our guide was egging us to move on, although not before filling up our bottles with river water at this last water source. From here, the climb up only got even tougher as the incline became even steeper. Halfway through, we begin to notice the surrounding flora becoming more ‘temperate’ in variety: moss, lichen and ferns abound. 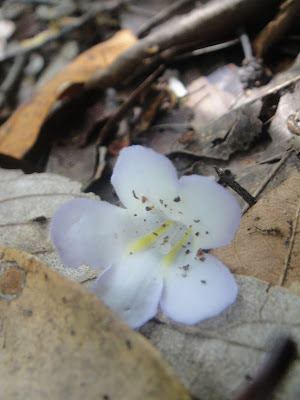 A species of flower... 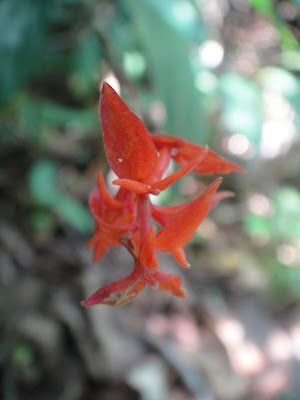 Another example of fine jungle flora...
The last part of the climb required us to scale almost 60 degrees up rocky boulders for close to an hour, myself constantly looking up at how far the jungle canopy was, hoping that soon, it will open up to sky and we were at the summit. Again, as was in Nuang, the summit came up suddenly. 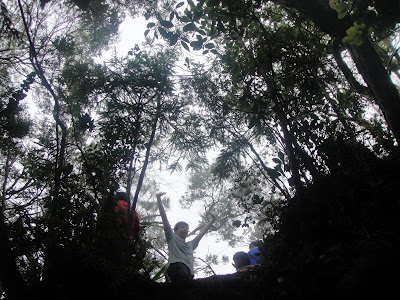 At the summit at last! Or is it again? :p
Little more than a large boulder, it was surrounded with coniferous trees which coupled with the mist still evident around, blocked out most of the surrounding panorama. Some would say it was quite disappointing after all the effort put in. I had then realized that I had been here before and perhaps my enforced ‘amnesia’ was due to the fact that the first time I was feeling the same disappointment I felt now for the lack of a ‘reward’ for all the effort! We were also not alone as two other groups eventually shared the top of the mountain with us, one coming before and another coming after. 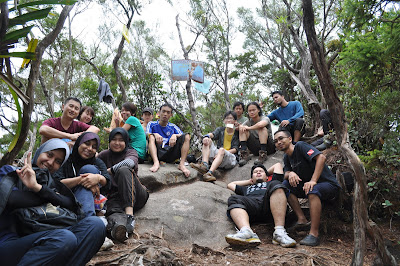 Who says it's lonely at the top? 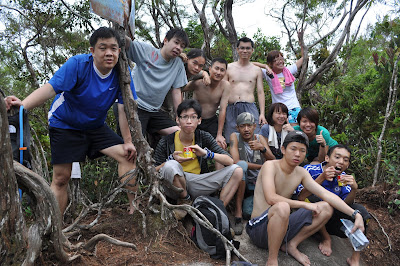 Our group's turn to stake a claim!
We lingered around for an hour and a half, consuming our packed lunch and drinking what’s left of our water. 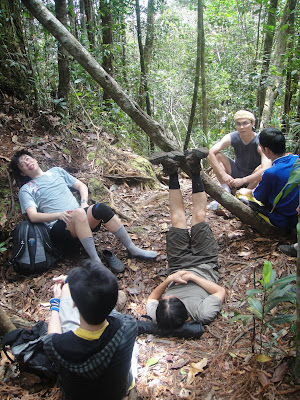 Oh, how I long the comforts of a soft bed... ;)
In between, we were visited by a curious squirrel in search of handouts (and no, I wouldn't recommend the bushy tailed creature as a source of food for you bush meat people out there. Shoo! :p) 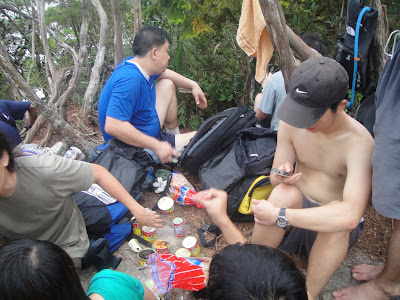 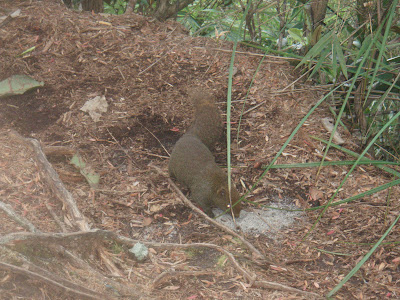 Sorry, no bush meat please!
At 2:30pm, we begin our journey down to the base camp. Going down was a lot easier than going up though some restraint is in order so as not to let momentum overtake you and you ending up toppling over the steep inclines. For this, you’ll require knees of steel. :p 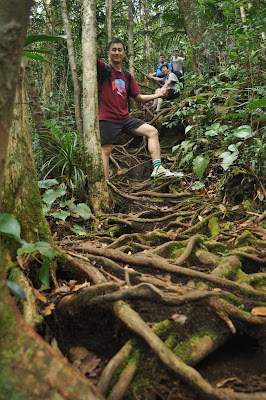 Descending down the mountain...
Nevertheless, we did cover a lot of ground pretty fast and soon we were back in Gua Bogor taking our rest and refilling our water. Our guide seems to be in a hurry to get back and despite promising us to show how he was going to do a ‘Tarzan’ with that long overhanging vine in the center of the cave, he urged us instead to head back to camp. 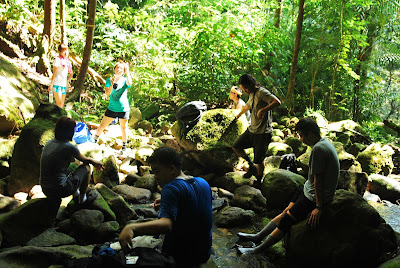 Taking a breather by the stream at Gua Bogor
Wei Han, Linus and I were the last to leave and when we managed to get ourselves back on the track passing the cave, we found our group ‘gone’! :p Wei Han had initially thought he knew where they went and led the way. It only took us a couple of minutes trudging through an overgrown ‘paku-pakis’ grove before we realized we were lost. :p Fortunately, a call out to our group managed to get a response from Sum and guided by his voice, we managed to pick our way out to rejoin the main group who had started off without us. 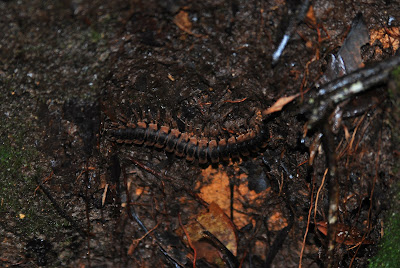 A species of 'pede'... generally harmless 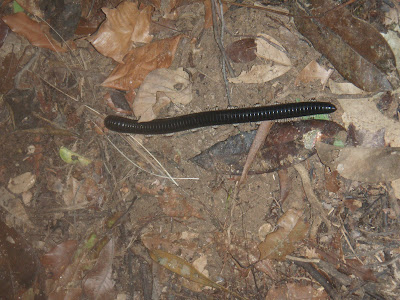 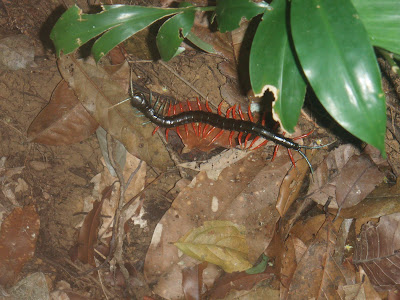 Now this one you better watch out! A centipede crossed our path on the way up...
We were back in the camp by 5:30pm. Overall, I should really be grateful that the weather cooperated. It was rather cool and cloudy in the morning and only briefly warm towards the evening. Not a drop of rain fell throughout which would have made the journey harrowing, negotiating down the slippery laterite slope if it did. We cleaned ourselves off at the waterfall immediately upstream of Jelawang, close to the camp. Here we were treated to a spectacle as some members of the other group of people managed to get some hemp rope to scale up a point in the middle of the 20m high fall. At first I had thought they might have wanted to do some ‘abselling’ but later did I realized that they had wanted to climb up only to slide down it’s smooth inclined sides into the shallow pool below (at high speed)! 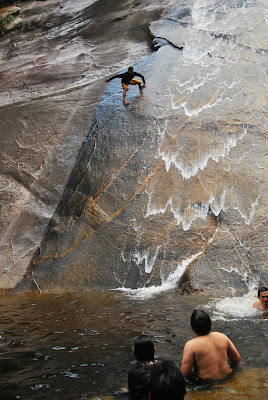 This is the most 'pro' of our waterfall surfers. Don't try unless you have already settled all your worldly dues...
Knowing how my rotten luck would hold in such circumstances, I chose not to participate despite an invitation from one of the ladies and Linus’s persistent pestering. Linus, the adrenaline junkie that he was, couldn’t resist not gambling a few pieces of teeth, bone and gristle for a few seconds of ‘fun’. Thankfully, none was needed to be donated to the ‘spirits’ of the falls. Linus apparently 'has'... ;)
Wei Han, Yee Wei and myself watched Linus and members from the other group court death as we washed. Sufficiently cleansed, I left the waterfall to help prepare dinner. Tonight’s highlight was spaghetti Bolognese. ;) I don’t really know what others might think, but it is really not that hard or exotic to prepare when going camping. All you need to have are Bunsen burners, mess tins, can of sauce and generous amounts of water and voila! We supplemented our ‘luxurious’ meals with some pickled Chinese vegetables and boiled luncheon meat, topping it off with more servings of ‘Neslo’. 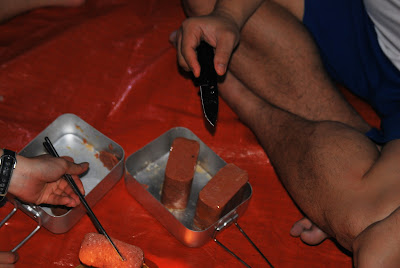 Tidak ditanggung halal!
As the full moon dominated the night sky, we again congregated over the rocky outcrop of Jelawang falls, marveling at its beauty. Our group was less enthusiastic about playing werewolves tonight, tired as we were. Instead we arranged ourselves to lie in a circle, our heads forming the hub and playing ‘Truth or Dare’. The ‘Dare’ was to plunge into the icy cold waters of the waterfalls ‘neh-ked’ (or so Linus says) but fortunately, it was not really enforced. One round of withering questions and soon we were off to bed, the journey home and the cool embrace of Telaga Tujuh the highlight for tomorrow. 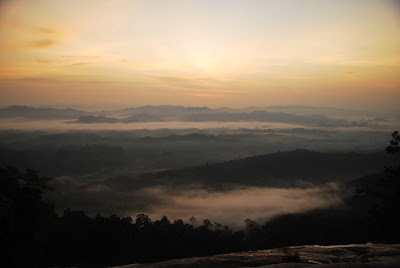 Eddie Tuen
Having seemingly stepped out of the cryogenic chamber and suddenly realizing many years has passed, he is suddenly very much aware that time and tide waits for no man though he is still fearful of wading to the shore. But time continues its relentless march and sooner or later he has to let go and accept that life must go on...